A “FitBit for Words”: A Library Partnership for Early Literacy 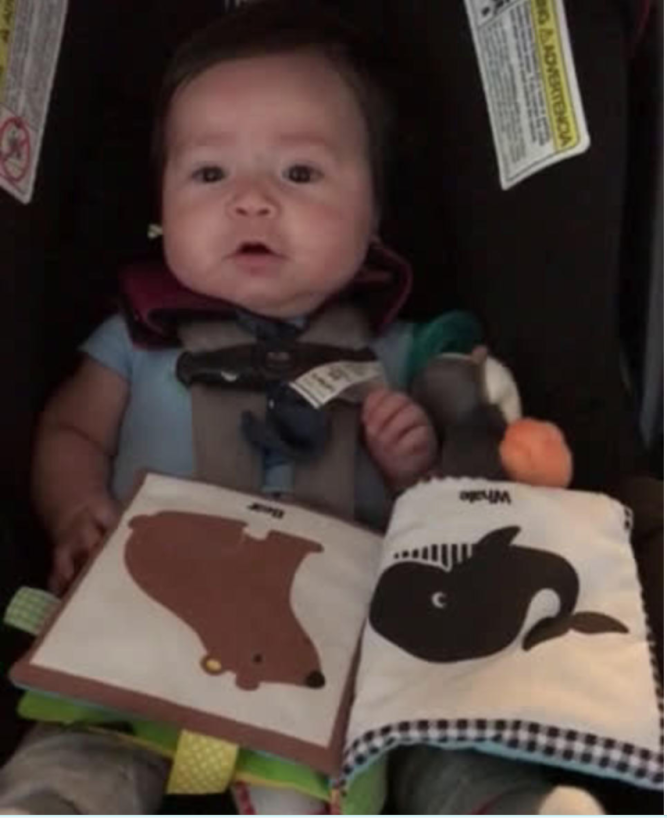 When I first started library school and began learning more about early literacy and child development, I was particularly fascinated by the fact that 90% of brain capacity is developed in the first five years of life.* Recent research shows the lifelong impact that early exposure to language can have for children. This really brought home for me the importance of libraries and early literacy programs.

I discovered that my county library system, San Mateo County Library (SMCL), had implemented a new early literacy program with positive results. Several years ago, SMCL began a partnership with the LENA Research Foundation to offer LENA’s Smarter Happy Baby curriculum. This program, “Talk, Read, Sing” equips parents of children up to 30 months of age with small recording devices that function as a “talk pedometer” that keep track of the amount of words their child is exposed to and the number of conversational interactions that take place. Through regularly tracking and weekly program guidance, the program empowers parents to make a positive difference in their child’s language development. Initially, the program targeted libraries serving low-income and high ESL populations most at risk for gaps in early literacy, and has since expanded to more locations.

Fast forward to a year later where I am the mother of a two-month-old baby. I now had even greater interest in what I could do as a parent to help facilitate brain development, especially during these early months where my son was changing so quickly and processing new information. I was thrilled to learn that my local SMCL branch (Brisbane, CA) was starting a new week session of the Talk, Read, Sing program, so I decided to sign up with my child.

Each week of the week program, participants are given a small recorder for tracking one day of the week. The recorder slips into a small vest that the child wears over other clothing. Once you turn it on and start recording, the recording automatically shuts off after 16 hours. While the tapes record conversations, the recording itself can’t be played back to ensure participant privacy. Participants turn in the recorders each week and attend hour-long sessions once a week, where they receive more information and support, including talking tips, video examples, and group sharing. Throughout the week, the LENA program will send text messages reminders, as well as a prompt for parents to submit the average number of reading minutes per day.

At first I was a little uncertain about whether the program was appropriate for me. After all, wasn’t I a library student who already knew about the importance of reading to kids? Hadn’t I already been reading books with my baby? But after recording for the first time and receiving my initial report, I was quickly humbled. I quickly became aware of how hard it is to keep up a high level of talk all day! When I was tired and changing what felt like the millionth diaper of the day, it was tough to keep talking. When it was time for yet another feeding, it was tempting to look at my phone instead of interacting with a baby that didn’t do a whole lot yet. However, the presence of the tracker would motivate me to sing another song or crack open a book with my baby.

The reports show the amount of adult words your child hears each session, as well as the number of conversational turns compared to average children for your age group. The recorders also track the amount of electronic noise (i.e. radio, television, etc.) over the course of the day. Reports are cumulative so you are able to see your progress over time and your weekly amount of reading minutes.

Since my child was so young, the initial amount of conversational turns was low as to be expected. Yet several weeks into the program when my child started to use a lot of baby babble, there was a dramatic leap in the amount of conversational turns. Even though the “conversations” were baby babble and not yet fully formed words, the LENA technology was able to recognize when my son was making verbal interactions with people. The report thus had the unexpected benefit of documenting when my child reached this developmental milestone.

At first it felt a little awkward to put my child in the recording vest. It is a little heavy and my son would initially fuss when I put it on. But he’d soon forget about it and I reminded myself it was a small price to pay for the greater benefit. Family members or other people we encountered would often comment or ask about it. While I was reluctant at first to explain, I found that it was actually an interesting conversation starter and most people were very interested and enthusiastic about the program.

I expected the weekly sessions to not teach me much new information. On the contrary, I found the weekly reminders and talking tips really helped motivate me to keep up a high level of talk. I joke that my life often feels like a hyperrealist novel, as I am constantly narrating our daily interactions with my son. I find myself making up song lyrics, talking about the day ahead, or reflecting on the day’s events. Talking around my son has become such a habit that it feels oddly silent when I am away from him and not discussing my actions aloud.

With just a few weeks to go in the program, it surprises me how much I have benefitted from the group support in the program. It helps hearing other parents discuss their challenges and get validation that it’s not always easy! It has also been encouraging to see older children in the program showing great interest in books to remind me that the seeds I am sowing now can pay great dividends down the road. Also, seeing the diversity of local parents and children has opened my eyes were opened to the value Talk, Read, Sing can have for any parent, regardless of background.

One thing I wish the reports could show was differentiation between the types of electronic noise as I feel there is a big difference between listening to music and watching television. I also wish the reports took sleep into consideration as there were a few days where my son slept more than usual resulting in a lower amount of talk time. It would also be helpful to have a LENA app in the future to be able to easily log more real-time details about the recording day in order to put the data into more context.

Taking part in a library program has given me greater insight into the value of library programs from a participant’s perspective. The importance of the community support cannot be understated. Having a convenient, accepting place to learn as a group has been a crucial part of making the program rewarding and meaningful for me. These are qualities I hope to impart as a librarian in any kind of library programming I develop.