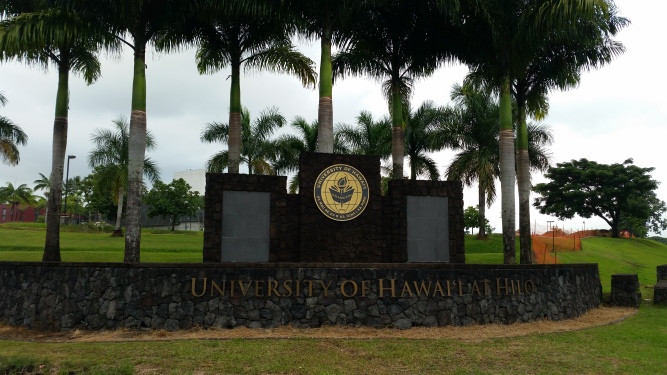 On November 11 and 12, Hawai’i Library Association held its annual conference in Hilo (on the “Big” Island). As a state-wide conference (in a small state), it’s obviously a much smaller event than the annual national conferences. This is the kind of thing where there’s plenty of room for student involvement.

As I mentioned last month in my joint post with Kendra, one of the ways that I have chosen to get involved as a distance student was to join the planning committee for this year’s conference. I did so without having any idea what I was getting myself into, having never organized an event of this scale before in my life. My inspiration was that this year, the conference was set to be on the island where I live, which doesn’t happen all that often. I wanted to make sure that: A) as many LIS students as possible would participate and B) that the conference would be thoroughly grounded in the culture of the place it was occurring in.

I wasn’t sure going in what kinds of skills I had to offer this group, beyond my knowledge of the island. Most of my fellow organizers were in Honolulu, so this knowledge, and my physical location, did prove helpful at times. But I didn’t end up feeling like those were my only valuable contributions to the committee.

1: Don’t be shy! I was often surprised by how shy others seemed in the meetings, and I’m also talking about professional librarians, not only other students. If you have a good idea, speak up and share it. Encourage others to do the same. I know most of us in library science are probably natural introverts. OVERCOME the urge to hide behind your laptop screen!

2: Trust your intuition. This is my general life policy, and it has served me as well so far in library school as anywhere else. I had a strong feeling that our conference should be held in Hilo, not Kona (the main resort area of the island). This was the first point of discussion in our planning process; we had to choose. I felt that it was partly because of my strong advocacy that UH Hilo was chosen as our conference site. 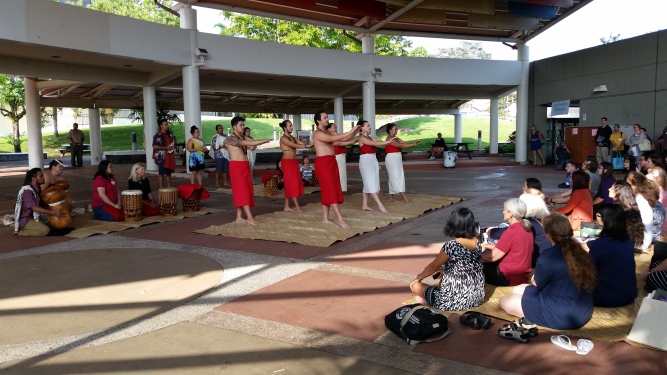 Because of this choice of location (which also kept the conference affordable and accessible for students, not at resort prices), we were able to have an incredible Native Hawaiian welcoming ceremony from UH Hilo students, as well as AMAZING locally grown food in our lunches. 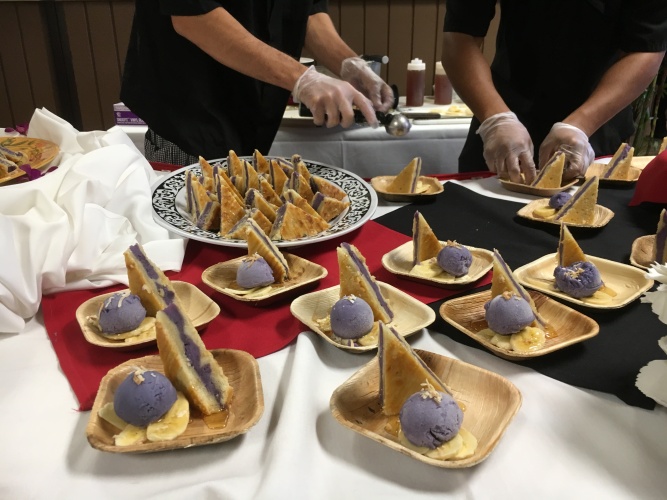 Fancy desserts… you know you want one. Photo courtesy of Allyson Ota.

I also know that some students attended who otherwise probably would not have done so, had it been in Kona. The location affected the whole outcome of the conference in ways I could not have anticipated, and I left feeling SO glad I had followed my intuition on that. I worried at the time of those initial meetings that perhaps I had talked too much or been too pushy, but the end result showed me that this had indeed been important. Follow your heart!

3: Offer help wherever you can, but respect your limits. I freely admit I had no clue what I was doing when the planning meetings started. So I didn’t exactly volunteer for any committees at the beginning. At times I felt, “I’m not on any committees… so what am I doing here?” But I never doubted my commitment to the planning process as a whole. Whenever I saw a need I could fill, I contacted that person, and filled it. Without actually being part of any committees, I ended up soliciting donations for the silent auction, helping set up and oversee the auction tables, going on initial site visits at the hotel and university, encouraging students who were contemplating presenting a poster, and presenting a lei to one of our distinguished keynote speakers. Without really being part of any committees, I felt I had the freedom to help where and when I could, without committing to tasks I was ignorant about how to perform. It’s also important to keep in mind your school responsibilities, so you don’t overextend yourself in general. 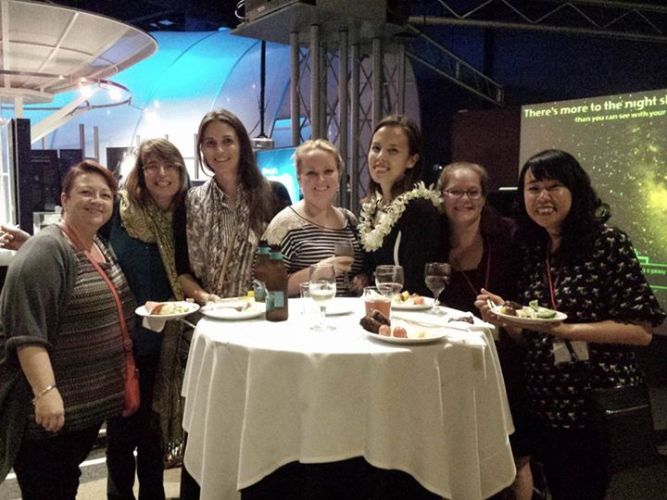 Yes, it’s a ton of work to organize an event (we had 178 attendees, in case you were wondering: that was more than originally anticipated). But the old saying is true: “Many hands make light work.” I hope none of my fellow planners got burned out by doing this. I hope most of us will be on the committee again next year. Yes, setting up on that first morning was a little stressful, but also fun and energizing. It was awesome to see what we could accomplish when we work together.

So, in sum: Get involved in planning your local, state-wide, or regional conferences! You’ll meet so many people you would never have met otherwise, and you’ll most likely impress them with your motivation to help plan conferences when you are still a student. They’ll get to know your work ethic and personality; you’ll get to know them and what kinds of librarianship they practice. I cannot recommend this highly enough as a form of networking with librarians at all stages in their careers. It’s also a great learning experience in seeing “the big picture.”

Categories: Conferences, Day in the Life, This Is Awesome