How Murder She Wrote Can Help With Library School

Jessica Fletcher, the goddess herself, portrayed by Angela Lansbury, has kept me company during long IM chat shifts with no users, during marathons of library data analysis, while I was organizing piles of cognitive mapping data, and while I take a break from all library school work to knit. As I’ve sat in my little librarian stereotype of Murder She Wrote, tea, and knitting, I’ve begun to realize that Jessica Fletcher is not only a role model for what I want to be when I grow up (minus all the murders), but also that her indomitable spirit is a great role model for library school students as well. Let me break it down for you.

“Could you tell me more about what you are hoping to learn about?”
Photo by Classic Film. Licensed Creative Commons.

This is one of the first things you will learn upon entering library school, and Jessica Fletcher is probably the most professional non-professional reference interviewer on the face of the earth. She doesn’t just talk to people when trying to solve a problem, she listens and people know that she is listening.She picks up on what they aren’t saying, asks questions to try to get to the bottom of things, and always ends the interaction with everyone happy (even occasionally when they are the murderer). These are all skills that are necessary for a high success rate of reference interactions, and apparently murder investigations.

Until an episode where someone accused Jessica’s late husband of murder, I had this sneaking suspicion that she was a cyborg. Why? She is always, always classy and gracious, even when people were upset and angry. This skill is the most important to gain, not just in your library life but in life in general. Handling difficult situations calmly, expertly, and with apparent ease is like the olympics of adulthood. The little known secret? Internally you can still feel like a deer in the headlights, just make sure that externally you are giving off the calm serenity of Jessica Fletcher. 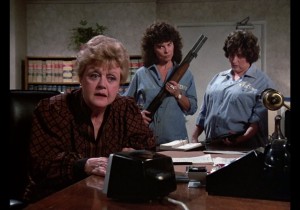 The other amazing thing about Jessica is that she manages to be classy and gracious regardless of whether this is the first person she was dealing with, or the last in a long day of murder sleuthing. By watching Murder She Wrote, you are reminded to put yourself in the shoes of the person on the other side of the desk, and be a bit more altruistic, even when the library is about to close in 5 minutes and all you can think about is that sandwich in your bag. If Jessica can take the time to make tea for an unexpected guest when the draft of her novel is due tomorrow, then I can treat every interaction like it is the first of my day.

Dealing with the haters

“Actually there are more libraries than McDonald’s in the United States.”
Photo by Classic Film. Licensed Creative Commons.

This is probably the one that hits closest to home for library students. Think about group projects in general, rarely you will find the holy grail of groups where everyone “gets it” and is on the same level. Most often however you are working with people who are coming from different abilities, circumstances, or commitment. Are you are a distance student and the rest of your group is on campus.? Have you never completed a libguide before and everyone else can make one in their sleep? Are you a full-time student and your partner is splitting their time between school and a full-time job? You never know what group projects will throw your way! Murder She Wrote gives you a chance to see how to work with others in such a way that you accomplish your end goal (though your end goal probably won’t involve murder) despite the difference in abilities, circumstances, or commitment. Jessica even gives you the example of working with a friend who is at cross-purposes with you and keeping the friendship in tact. Even if your group members aren’t your friends, this is still a handy tip when you have multiple semesters left and you need to continue to be able to make eye contact with your classmates.

In the end, Jessica Fletcher is a master of social negotiation, soft skills, and amateur detective work. Even if you don’t think you need to work on any of the skills I just listed (I know I do), Murder She Wrote is still a pretty cool way to kick back and watch Angela Lansbury catch sweater-vest wearing murderers.