Editor’s note: This post is part of our series entitled Voces del Sur: Rethinking LIS from the Latin American and Caribbean Perspective, featuring writers from the blog Infotecarios. Guest bloggers will answer questions about their experience as librarians and library school students in Latin America and the Caribbean. Head on over to Infotecarios to read this post in Spanish. 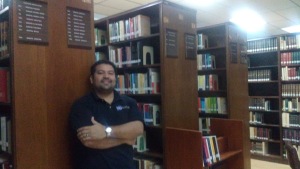 Renny Granda has a bachelor’s degree in Library Sciences from the Central University of Venezuela (2007). He specialized in Management at the Metropolitan University (2012-2016), and he is an invited professor at the School of Library and Archival Sciences at the Faculty of Humanities and Education at the Central University of Venezuela (2015-2016). He has presented at conferences at various national and international venues. He has published several articles on the state of public libraries in Venezuela and on sites such as Infotecarios.com and QueLeer.com.ve; and he has been a collaborator in the column “Developing Latin America” of the journal Information Development. Currently, he is an active member of the online, Latin American group Infotecarios (2013-2016) and represents Venezuela in this regional collective.

What is a trend in library science that interests you and why?

I am passionate about public libraries. My first job was in a public library as an intern. I was a library school student in my first semesters and they gave us the opportunity to do paid internships. During the internship I learned the value of public libraries as a democratic institution, in which everyone could have access to information and develop knowledge. I was lucky that my first job was in the “Don Luis y Misia Virginia” Public Library in the town of Guatire, in the state of Miranda, Venezuela. The library is in the former childhood home of Rómulo Betancourt, the first democratic president of Venezuela (1959-1964) and the father of Virginia Betancourt, who was the director of the National Library of Venezuela for more than twenty-five years (1974-1999) and our only Venezuelan IFLA Medal winner (2005). Since this experience, I’ve always been interested in learning more about public libraries. Later, still a student and along with my fellow classmates, I was able to travel to Medellín, Colombia to attend the 1st International Conference for Information Science Research in 2006, which had the theme of “Knowledge Management in the Public Library: possibilities for constructing citizenship.” Getting to know and see this kind of movement within the Colombian library profession was a formative experience. That trip was key for us to expand our horizons and knowledge, and it got me even more interested in the area of public libraries as universal institutions, as a line of research, as a space for constructing citizenship, and as a way to create policies regarding education, information and culture.

To be honest, it was never in my plans to study library science. To go to a public university in Venezuela is a bit complicated, and to study what you really want to study when you’re in a part of the lower-middle class is very difficult. I wanted to study journalism because I dreamed of being a sports writer, but the communications major in my university was very popular, and even my good grades couldn’t get me a spot. After seeing it wasn’t possible to go to college with this major, I had to reevaluate my options and I looked for a college major that wasn’t so popular and that also interested me. And that’s how I found the School of Library and Archival Science at the Central University of Venezuela. I still tried to change back to journalism even when I was a library school student, but it just wasn’t possible. Overcoming the first few boring semesters and introductory classes wasn’t easy. But once I had my first work experience in the public library and I started taking more specialized classes, library science as a profession made more sense for me. It took about two years (2002-2004) for me to be convinced that librarianship was the right profession for me. Things like information as a system, the societal impact of information services, as well as the influence of some really great professors helped me grow my interests. And since then I’ve had my feet firmly planted on the ground.

What do you think are some of the greatest challenges facing libraries in Latin America?

I believe that if it is true the archives and libraries sector has become more important and has grown more or less in Latin America, it has done so in isolation in certain countries or regions. We still have a social debt to the growth and development from the point of view of regional integration, for example with the principles expressed the Declaration of Caracas for the Public Library as a development and an instrument of social change in Latin America and the Caribbean (1982). Countries like Colombia, Chile, Argentina, Costa Rica, Brazil, Mexico, have managed to somehow interpret and implement the spirit of the Latin American declaration and the principles of the UNESCO Public Library Manifesto (1994); however, the vast majority of nations in the region have been unable to give public libraries the attention they deserve, which translates into many problems at two main causes: the lack of a solid foundation to ensure its funding and lack of an optimal legal framework to generate specific public policies for information, education and culture from our library networks. I think that the greatest challenges have to do with the actions that we librarians should and can undertake to address these problems that increase social gaps that affect significantly, without a doubt, our societies and our citizens. Currently, IFLA has proposed a set of tools to support the immediate defense of access to information and inclusion of libraries in national development plans, based on the Declaration of Lyon on access to information and development (2014) and the Sustainable development Goals Agenda 2030 of the United Nations. These represent viable strategic lines of action to be taken into account, not only for the officers or directors of libraries but by all professional librarians. A great friend and Colombian counterpart, Luis Bernardo Yépes Osorio says that governments appreciate libraries and would be really important for governance and for communities, if only those at the helm could show the impact through actions. And beyond the political will, the role of the librarian is always important to show them that you -the libraries- are useful to society. Here are our biggest challenges …

Where do you work? Describe a typical day.

I imagine everyone will think I dedicate myself and I that I work at a public library, but really … I work in Central Library of the Supreme Court of my country, specializing in legal issues, and that offers its services to library employees, the institution, and to external users of all kinds, ranging from lawyers, law students, professors, researchers, even the general community. It could be said to be a public library specializing in legal sciences, which serves the public Monday through Friday from 8:30 am. to 3:30 pm. A typical day for me starts early, at 5:00 am approximately, since I live in Guatire (Miranda) a satellite town that is about 45 kilometers from Caracas. But it takes 2 hours or more because of the traffic cramming every morning into the capital city. I hold my job of “Library Assistant” (2008-2016), where I am responsible for managing the unit’s technical services. As manager of the technical services department I lead the classification processes (LC), cataloging, indexing, normalization, processing and preparation of library materials or publications acquired by the library in various ways, either by donation, purchase, or loan. I handle the daily database inputs of records to our ILS database Alexandria, which makes available through the online catalog all the information concerning the bibliographic description of our collections to the public. On many occasions, I also lend my support to the public services unit, where we serve multiple requirements and provide effective solutions to diverse information needs of the legal field. At the same time, we offer guided group tours for people visiting for the first time. One could say that every day we are part of a team that has the responsibility to preserve the historical memory of the highest authority of the judiciary in Venezuela; in other words, we are part of what for many is the most important legal library in the country.