The Anatomy of a Book- Part 1

Authors Note: This is part one in a multiple part series on the anatomy of the book. This part will talk about the basics of books including materials and formats, next one will identify parts of the book itself.

When I got to library school I may have loved books and reading but damned if I had no idea what made up a book. Worse for me, my first days on campus were started in a rare book library where I quickly learned through a crash course of book history. My lack of knowledge for the parts of the book became quickly clear to me, and so, as part of a two part post, I’d like to impart what I’ve learned about the anatomy of books to future and current (and, hey, former as well) library school students.

John Carter and Nicolas Barker. ABC For Book Collectors Eighth Edition, 2004- A must for rare book library students and anyone interested in the field of book history.

Jane Greenfield ABC of Bookbinding, 1998 Sort of the same thing as “book collecting” but focused entirely on the book binding process.

Elizabeth Eisenstein. The Printing Revolution in Early Modern Europe, 1983- An abridged copy of Eisenstein’s earlier The Printing Press as an Agent of Change. One of the foundational texts of book history, arguing for the “revolutionary” impact of printing rather than just the history of printing.

Adrian Johns. The Nature of the Book: Print and Knowledge in the Making, 2000- Johns and Eisenstein engage in glorious intellectual fisticuffs in The American Historical Review over the “revolutionary” aspects of printing. Johns sees printing as a much more subtle transformation where aspects of manuscript and print culture intermingle for centuries after Gutenberg.

There are tons and tons of other books about books that are interesting and helpful, I personally think these are “must reads” for those interested in book anatomy and book history.

So what is a book?

What we now know as the book form is actually the form known as the codex. The codex, from the Latin for “tree trunk,” replaced scrolls as the primary repository for written information coinciding with the rise of Christianity. The codex, or from now on the book, is a simple collection of writing material collected between boards (front and back cover) and bound at the spine. Scholars believe that the idea of the codex came from rewritable wax tablets popular in the Roman Empire around the 1st century AD, but it didn’t catch on until Christianity made it a symbol by the 6th Century AD. Prior to the codex, writing was done on scrolls (many of the early libraries were shelves of scrolls because the codex wasn’t around) and prior to that on clay tablets. [For more see Colin H. Roberts and T.C Skeat. The Birth of the Codex (Oxford UP: London, 1983) 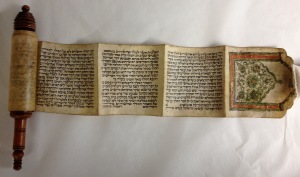 The surface that was written on was one of several differing types of material, developed over time:

Papyrus: Made from the leaves of reed plants and grown exclusively in warm and wet climates (famous along the floodplains of the Nile in Egypt). This material is most often used in scrolls. Because of the limiting growing conditions papyrus was extremely expensive and limited geographically. Fun Fact: Papyrus is incredibly strong and will, ostensibly, last forever as long as it doesn’t get wet (or gets too much sun). However, this strength comes at a price because it cannot be folded thus cannot be made into books.

Parchment or Vellum: Parchment is made from the dried and treated skin of animals, often, goat, sheep, and calf (known as Vellum, coming from the same stem as “veal”). Similar to the tanning process that creates leather, parchment is created by treating skin with lime then shaving the hair from it before being stretched and dried. It is heavy and often flexes in changing heat and humidity conditions. Fun Fact: it will often have holes in it that are often not from wear but from bug bites or wounds on the animal during the animal’s life. The younger the animal at treatment the smoother and silkier the parchment (and less likely to have wounds), this is often used to make the most prized parchment (also the saddest).

Paper: Paper-making was invented in the second century AD in China, appearing in Europe much later. It is made from “moist fibers,” through a process by which a screen is placed in a water and fiber mixture and then pulled out and dried. I say fibers because the first papers were exclusively made with old and discarded cloth rags. In the medieval world “rag-pickers” would go through garbage dumps for materials. The life cycle of cloth would most likely go from clothes, to wash rags and then at their most grossest they were thrown out to make paper. (think about that next time you handle an old book)  It wasn’t until the 19th century that paper started to be made with wood pulp leading to the oft feared “ACIDIC paper” explosion. Fun Fact: Early paper is often much more durable than later papers because it is made of this cloth (probably used up medieval underwear). That is why if you see book printed in the late 19th century through mid-20th century the paper is often brittle but a book from the 15th century is in wonderful condition. A common component of cellulose called “lignin” is present in wood pulp paper before the 1970s and eats away at the fibers when exposed to light.

Leaves vs Pages– Important to note the difference between pages and leaves. A leaf is the physical folded sheet of paper upon which the Page (two per leaf, front and back or verso and recto) are printed or written on.

Formats:  Often in rare book classes, or special collections librarianship you will hear format classifications: Folio, Quarto, Octavo and so on. Formats of books denote the number of folds required in making the book itself. Sometimes, not always, they correspond to the size of the books themselves (Folios are the largest, with 64-mo being teeny tiny).

Folio- 1 fold, largest of the books. It is a large piece of paper (sometimes trimmed) folded once to make two leaves (with two pages, back and front, on each leaf)

As I said above, most of the time these formats correspond with size but not always. The paper would be printed before the folding occurred, sometimes leading to “uncut” leaves where the book was bound and printed but the pages were not cut.

Once the pages were printed and folded the next step would be to bind it. Unlike today where we purchase books bound before we get them, this was not the case for a long period in western history. Books would often be sold unbound and it was the job of the new owner to enlist a book binder to bind them. It is often the case where copies of texts will be in different orders than others, or be bound together with other, unrelated, texts.