In the spirit of new beginnings, the Hack Library School crew has inducted eight new contributing writers.  We had a huge amount of interest and wanted to diversify the group as much as possible.  We’re very excited for you to meet our new bunch, so here we go!

H! I’m a first-year MLS student at Emporia State University SLIM-Oregon in Portland, as well as a library assistant at Oregon Health and Science University, manning the circulation desk and slinging books. I’m still trying to decide between academic and special librarianship, but I love to be wherever librarianship is pushing against its traditional boundaries. I’m particularly interested in the uses of media in the library, as well as the ways in which our relationship to information is changing. But mostly I love connecting people to the information and knowledge they need.  Check out my blog at www.sidelongcitation.com or follow me on Twitter: @sidelongcite 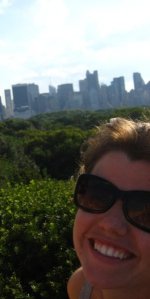 I am about to begin my second semester at Queens College School of Library and Information Science, in Queens, New York.. I also currently teach first grade and hope to focus on School Media Studies in order to pursue a career as a school librarian. I am interested in technology and print literacy and how to give students in urban areas more access to both. I love anything that has to do with reading and recommending the perfect book, whether it be to students, friends or family. You can follow me on twitter at cadill08.

Chris Eaker is a masters student in the School of Information Science at the University of Tennessee and is a graduate research assistant in the Data Curation Education in Research Centers program.  He comes to the field of librarianship after already having a successful career in engineering. He earned a bachelor of science degree in civil and environmental engineering from the Georgia Institute of Technology.  As a registered professional engineer in Tennessee and Georgia, he practiced as an engineer for almost ten years designing wastewater conveyance and treatment systems. He brings to the field of library and information science expertise gained in dealing with scientific data, along with his engineering knowledge and experience. He plans to become a science and engineering academic librarian upon graduation, as well as specialize in scientific data curation.
Paul Lai:

Paul Lai recently completed his first semester at St. Catherine University’s MLIS program and is even more enamored with the library world than he was before. Previously a college instructor of Asian American literature, he continues to research contemporary literature and posts online book reviews at Asian American Literature Fans. Paul hopes to explore how libraries foster democratic citizenship and create communities of learning. He also has a particular interest in the recent emergence of literacy dog programs and the longer history of dogs in libraries. He tweets occasionally @pylduck and posts pictures of his dog on his blog, ssqd.
Brianna Marshall:

Bri Marshall is a first year dual-degree Master of Library Science/Master of Information Science student at Indiana University’s School of Library and Information Science in Bloomington, IN. She currently teaches undergraduate library instruction sessions and works at a rare books library. Bri would eventually like to work with digital projects at an academic library, so some of her eclectic interests include digital libraries, metadata, emerging technologies, archives and digital user experience. Follow her exploits on her blog, Not So Stern Librarian, or via Twitter @notsosternlib.
Topher Lawton:

Topher Lawton is a first-year student at Syracuse University’s School of Information Studies, working toward an MS-LIS. He’s interested in information design and architecture, modern reference techniques, and the idea that librarianship goes well beyond the library. Topher’s undergraduate background in Music, English, and Biology forever forces him to stay interdisciplinary, a quirk he greatly enjoys. He contributes regularly to Information Space and authors Multivariable Librarianship. Follow him on Twitter @hieanon.
Kevin Coleman: 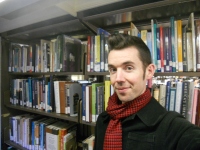 Kevin Coleman is in his second year in the SLIS program at San Jose State University.  Originally from a small town in Louisiana, he now lives in San Francisco.  He works part-time at the Oakland Public Library, and volunteers for the Prelinger Library.  His interests include library zine collections, queer libraries and archives, and the future of public libraries.
Joanna June

My name is Joanna June and I am just finishing my first year of MLIS online via Florida State. I’m going to be at the library in Florence next year. If there is such a thing, I don’t think I would qualify as a traditional library science student. I am a television editor by trade and I am interested in moving more into media management and preservation. While I love my local library and am excited to become the student librarian in Florence, I don’t think traditional librarianship will be part of my career path. A geek through and through, I continue to be interested in AV media as well as international policy, digital libraries, copyright and Internet issues and really all things tech.  Follow me on Twitter @coffeebooksbeer and my blog, www.coffeebooksandbeer.com
0.000000 0.000000