Disclaimer: This is a post of my individual perspective on my MLIS program and not representative of  the student body or faculty of ESU. I started the program in the fall of 2009 and will finish in December of 2011.

Before I get into the nitty-gritty details of my experience with Emporia State University’s  School of Library and Information Management (SLIM) Portland Cohort, I would like to share a little of my journey into the program. 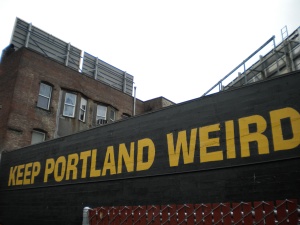 While I have always wanted to go into library school, I really didn’t think I would find myself enrolled in an online-program. I moved to Portland, Oregon from the east coast, with the intention of  hanging out for six months to a year before returning home to start a MLIS program. Fast forward two and a half years, I’ve fallen head-over-heels in love with this town and realize I’m going to be here for a while. I was working at a corporate bookstore, and two of my coworkers had just started library school with Emporia’s distance learning program. Based in Kansas, ESU’s SLIM offers cohort programs in Salt Lake City, Denver and here in Portland. Since SLIM was the only MLIS program in Oregon, SLIM was the one for me.

Along with the MLIS, SLIM offers an Archives Studies Certificate, School Library Media Licensure, and a Doctor of Philosophy. I have heard a rumor that the program will also offer a Young Adult Certificate – but please don’t quote me on that. The MLIS classes mostly focus on theory. The foundation classes we started out with revolved heavily around the Information Transfer Cycle.  After the foundation classes, we are enrolled in “tool” classes (such as collection development or reference services courses), “application” classes (technology or management) and elective courses. While SLIM is a distant learning program, it is better described as a hybrid program. The majority of our work is conducted through an online learning platform, but we also have weekend intensive class time. Twice a semester, classroom space is rented at Portland State University, and we meet with our professors for about 12 hours over two days. Often the weekends are dedicated to group work, especially the last weekend when presentations are delivered. Another aspect of the curriculum worth mentioning is the practicum opportunities. With a strong emphasis on library science theory, SLIM does offer a practicum – an internship for school credit – as a counterbalance. The practicum was one of the strongest selling points for me, as a lot of alumni mention that their first job after library school came directly out of (or closely related to) their practicum experience. The program ends with a capstone course, in which we create a digital portfolio our work in the program, an excellent resource to have when applying for jobs.

I like to end things in a positive note, so let me get my negative notes out of the way. My only complaint of the SLIM program is the fact that I feel we are a bit of an outpost in the wilderness. The only real school support we get is directly related to our curriculum. For example, I don’t receive any of the benefits of attending school with a campus, such as health care. Upon enrolling in the program, I took a student worker position in an academic library, which of course doesn’t offer any benefits. The only way I can take advantage of health care offered by ESU is to visit a campus health center….in Kansas. And because we only rent classroom from PSU, we don’t have access to their services. It would be wonderful to be able to access their library’s resources rather than have my school’s library be halfway across the country. But of course these are considerations anyone has to take in when enrolling in a distance learning programs.

The biggest strength of this program is its strong connection to the Pacific Northwest’s library community. Not only are there plenty of alumni in the area and many libraries welcome SLIM students to participate in practicums, SLIM hires instructors from local libraries to teach classes. Yes, some of the faculty are flown out from Kansas – especially for the foundation classes – but it is also beneficial to have a member of your local community teach the more practical classes. And the library community in the Pacific Northwest is wonderful! Made up of  welcoming librarians, it embraces innovations and creative ways to provide traditional library services.

The unique hybrid class is also a strength of this program. While online courses do free up a lot of your time, which is important if you want to work while in school, the hybrid program does allow for a collaborative classroom environment. You can interact with your instructors  in person and you can get to know your classmates as you go through classes together.

Overall,  the SLIM program is an excellent program. It offers students a solid foundation in library science theory while providing opportunities to connect with the wider library community for hands-on learning. I hope that you don’t have to take my word for it, as I encourage my classmates to post their insights, too. And please, feel free to ask any questions. Like most library students, I love talking about library school…